Our philosophy of working is to learn from what we do and apply that to the next project.

This post is called part two because it links back to our previous post in two ways:

– Building on the visual world shown in the previous artwork and

– Using what was learnt in the previous work, the process was enhanced when making this one.

I will run through some of how this new work was created and how the process was improved (see below including the video). First though I wanted to explain why we do these artworks when there might not seem to be direct benefit. These projects help us get to “better” quicker: Everything we learn feeds into growing a body of skills that allow us to make things we haven’t before or to make things we have before but more efficiently.

The artworks are a chance to learn and to demonstrate learning in showcases (like the one you are reading). Demonstrating certain types of work has also meant more business enquires involving related skills.

It all starts with a single line idea. The previous work “Night Market” featured ultra cheap housing in the form of pre-made cabins that are placed wherever they can be mounted, including to the sides of high buildings and structures. For “Upper Ville” the idea was: what would it look like from one of the highest shanty towns and who might be watching in them from above?

This led to the sketch below. It was important to sketch as one of the things learnt from the previous artwork in the series was that composition still needs some thought when using a 3D base to make images. 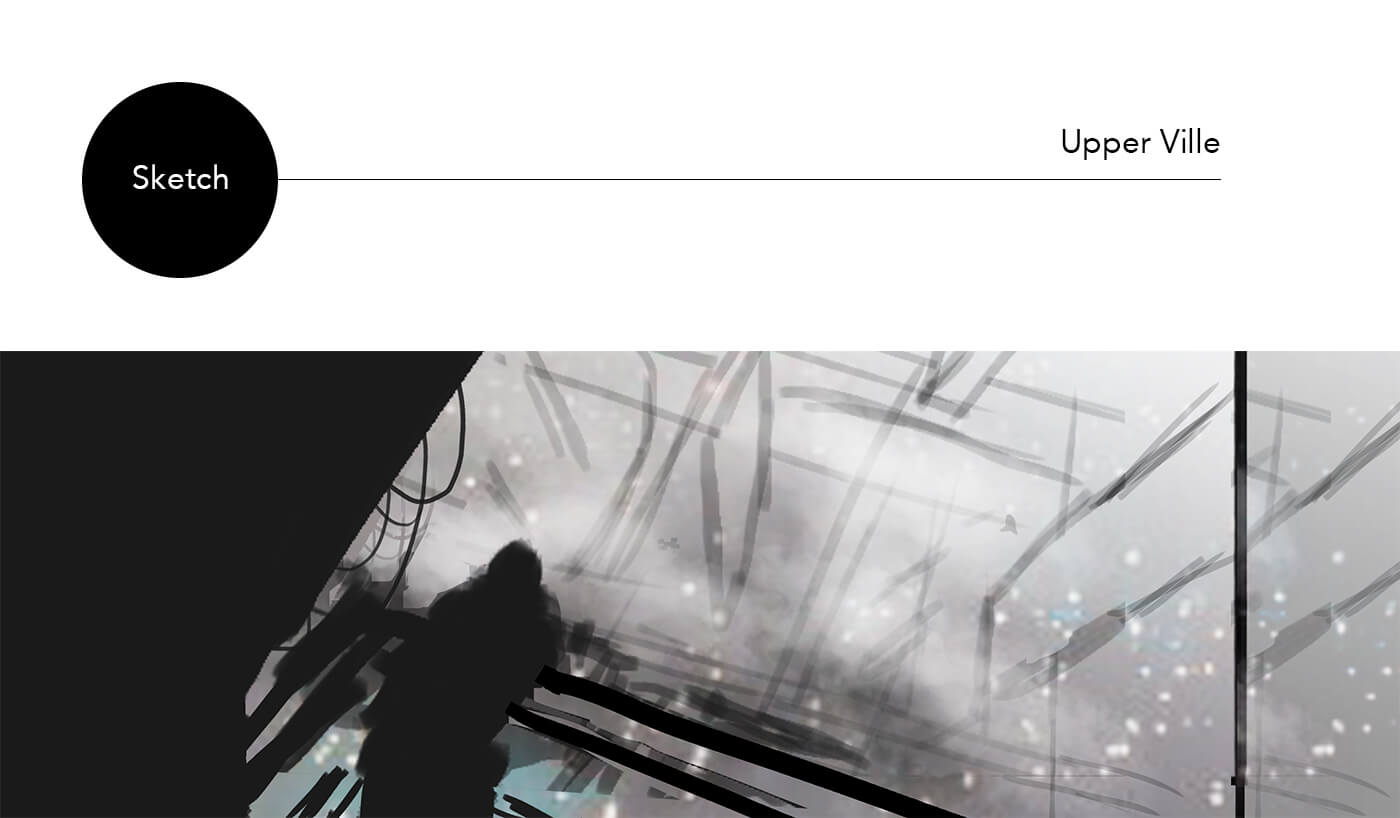 The sketch showed that the need for a focal point was desired and so a character was created to “lead” the viewer into the scene. This is the cyborg character. He took some sculpting in 3D which you can see here.

Like in “Night Market” traffic was needed and some new vehicles were made for this purpose.

For building the scene itself we learnt how to render more lighting in the 3D scene which meant there were less heavy changes needed to be made during the painting process. This meant concentration could be placed on building up the scene rather than fixing things after the rendering.

A great deal has been learnt doing both of these projects. Techniques have been tried or refined that will make us more ready for the efficient creation of visual products.

This is in line with the key philosophy of Apogii which is to take a creative lead in every aspect of our work; to raise up visual standards wherever possible. Upskilling even when busy with client projects means we are not just reacting to demands but able to offer suggestions and new ways of thinking.

Really hope that you enjoy seeing our artworks and that you get to share in the benefits.

We’ll leave you with a few crops from Upper Ville that allow you to see details from the artwork and imagine new stories.